Soweto broke my heart when I visited as a teenager in 1985 and again in 1989. Both times, as the church broke into full-bodied song, I burst into tears. My overpowering grief grew from my fear as a white male that I represented nothing but pain to the black South Africans, yet they welcomed me warmly. I was there to represent my church and my beliefs, but I hardly knew what I was doing. I was in shock. 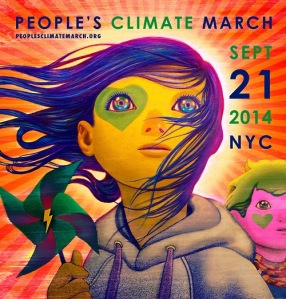 This Sunday I may also be in shock as I join my comrades at the People’s Climate March in New York City. Living in Miami, I feel very isolated from places like New York and San Francisco where green living is celebrated as a way of life and climate change is recognized as a threat to all. Marching with tens of thousands of like-minded people will be a novel experience. I’ll probably cry, because that’s just part of my character.

Pollution is a civil rights issue, and climate change is simply carbon pollution writ large. It hurts everyone, but it inflicts the greatest pain on the helpless and the poor, such as the people living in the ghettos of Soweto. Or the islands of the Indian Ocean. Or the people who can’t afford to pack up and fly away from South Florida when the big hurricane eventually hits.

In the 1980s, the grip of apartheid appeared intractable, and pain and confusion were like Berlin Walls against freedom. In the year 2014, the ogre of climate change has the future in its claws and feeds on insatiable greed. How can we possible stop the fossil fuel industry, the richest entity that has ever existed? How can we possibly overcome centuries of atmospheric pollution that has been accumulating since the Industrial Revolution?

Apartheid came crashing down and Nelson Mandela arose much quicker than I could have imagined when I visited and studied the South African situation as a college student at Columbia University, a place leading the divestment movement that exerted significant pressure on the South African government. I was not an active protester at the university, but I was willing to put my body on the line and take a stand by visiting South Africa when the situation was still very violent, tense, and hopeless.

Climate change must come crashing down quickly. Denialism must end, and action for a sustainable future must arise much quicker than we can imagine. It will be a monumental battle, and it is unclear what direction it will take. But change is coming, and some of it is still within our control. We can fight for greater justice, or we can sit down and let the stranglehold of pollution slowly choke us to death.

I march for the ocean. To me, it is the most beautiful and life-affirming place, and it is also the most vulnerable and misunderstood place. It suffers from an apartheid — an apart-ness from humans — and we are destroying it. Thinking that we are disconnected from or superior to the ocean is insane. If the oceans go, we go.

I march for the traditional, sentimental reasons too: for my nephews in their 20s, for extended family, for friends, and for the next generation. I don’t want people or the planet to suffer, period, especially when we can prevent much of it.

Climate change is very much like racism. Everyone shares some guilt of being a carbon polluter, because we have inherited that way of life, just as our history was built on racist heritages. Ending these injustices requires long-term, unwavering efforts on multiple fronts. It is complicated and confusing, but such misgivings are not an excuse for inaction. We act, or we get acted upon.

I’m not sure I can explain exactly why I am marching. If nothing else, I feel that I have to try, to make some kind of effort, in some way, to reach the leaders of the world, because we need a fundamental shift in society to address this threat. My faith in humanity is weak, but I have to believe that justice will prevail.

Sorry, kids of the future, if we break your hearts. We didn’t know who we was.